2004 – Entwined Vessel with Root Handle has won the Handweavers Guild of America Award at Convergence 2004 in Denver, Colorado! 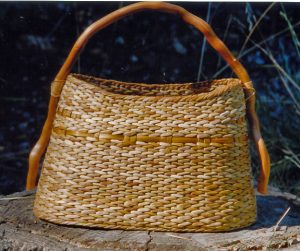 Kevin Wallace, the Juror for Don’t Fence Me In – Containing the West wrote:

“A work by Joan Carrigan from her Entwined Series received the HGA Award. This work was utterly charming. Originally a more experimental or contemporary work was considered for the award; however, after spending time walking through the exhibit and looking at the works, I realized that the restraint and subtlety employed by the artist was responsible for a powerful work that remained in the mind and heart much longer than those which offered a greater initial response.”
from Shuttle Spindle & Dyepot, Volume XXXV, No. 4, Fall 2004
<< Previous Post Next Post >>